A PORTRAIT OF DIRECTOR THOMAS HEISE

Thomas Heise is travelling a lot at the moment. His new documentary HEIMAT IS A SPACE IN TIME is touring festivals all over the world, and he has just returned from Toronto. The earnestness with which his more than three-and-a-half hour long film was watched there pleased him. “Anyone coming out, it was only the passing audiences. People who find film generally interesting and hadn’t seen how long it was, and then expected action.”

Action is the wrong word for the formally simple but captivating arrangement of the film. Documents are read out by Heise himself – letters, diary entries, notes, essays. The text occurs behind images that function associatively. “We filmed a lot of forest,” Heise comments with wry amusement in regard to the genesis of HEIMAT IS A SPACE IN TIME. This quantity of forest may come as a surprise, as the new film is about his own family. Usually, such films would consist of photos, film material, information from contemporary witnesses, site visits. In Heise’s case, apart from a few private photos, there are landscape shots and shunting trains. And forest, of course.

For Heise, such photographs also help the director to become a stranger to himself, to maintain distance from the private. “You have to separate yourself,” Heise says at a snack bar not far from his home in Berlin-Prenzlauer Berg. He regards “family films” with horror, which is why he demands that his students at the Academy of Fine Arts in Vienna approach a person they do not know in documentary form during their initial exercises. One who doesn’t come from their own milieu. 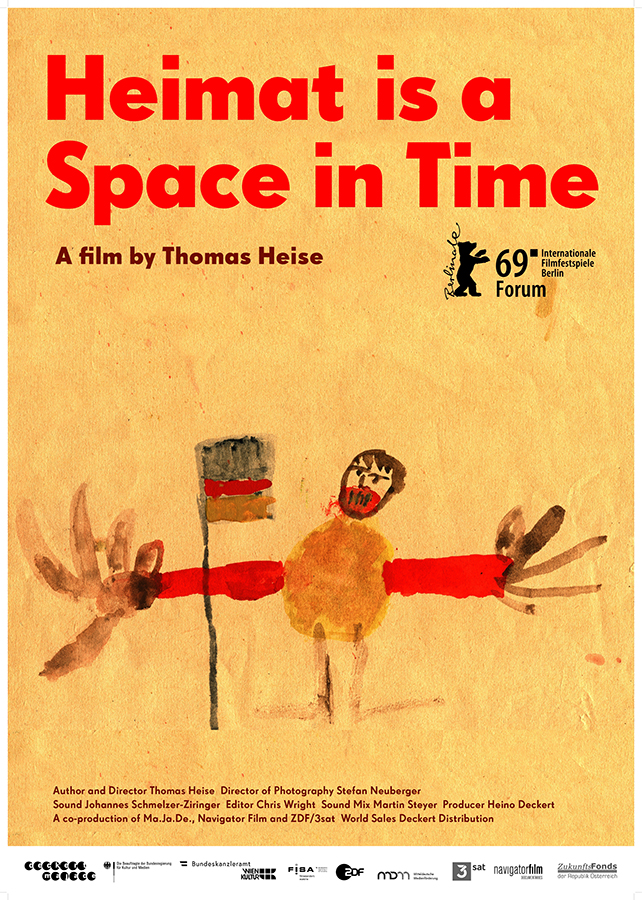 That’s also why he made this film about his family so late. And he made it so that it is far more than navel-gazing over his own socialization. HEIMAT IS A SPACE IN TIME tells 20th century German history using the single example of the filmmaker’s family, one might say.

The most breathtaking scene is the one about the Holocaust. There is the way that correspondence from the Jewish part of the family in Vienna is read out off stage, gradually drying up: it deals with increasing impositions by the Nazis but expresses, nevertheless and right up to the end, the hope that things cannot become worse. But the unimaginable is present in the image through­out – for minutes, the camera goes down an alphabetical list of the deported Viennese Jews. And when it reaches the names of Heise’s relatives, we hear no more of the private mail. The soundtrack falls silent.

This skillful interplay of cinematic means can be found in many films by Heise. In IMBISS SPEZIAL, shot in October 1989 as a requiem for the declining GDR, we see the work and customers of a snack bar in Berlin’s Lichtenberg station. And we hear the employees’ stories, their dreams, plans and disappointments – and radio news that Heise had recorded when lying in the hospital for three weeks in the summer of 1989. Seemingly insignificant and ordinary aspects, which – in tense juxtaposition with images from shortly before the historical moment, the fall of the Berlin Wall, the disappearance of the GDR – tell us much more than official speeches explaining that time.

Thomas Heise collects such recordings. The other major film from his extensive oeuvre is MATERIAL, made ten years before HEIMAT IS A SPACE IN TIME, and also almost three hours long. If HEIMAT IS A SPACE IN TIME is the film that brings order to the family’s history after it has disappeared (father, brother, mother are all dead), MATERIAL is the film making the end of the GDR comprehensible through a series of fragments from the years 1987 to 1993. More comprehensible than movie kitsch featuring nasty Stasi henchmen could ever make it.

And that is precisely because the film operates at the edge, like the filmmaker himself, who was forced to leave the film academy in the GDR. MATERIAL avoids the jubilant images of the fall of the Berlin Wall and instead shows how, the day before, all the self-critical, hopeful SED members expected a change from their wavering leadership, a departure for which it could no longer summon the strength. Or how prisoners discuss with their guards what the turning point in the country means to them in December 1989.

These are “images waiting for history”, as playwright Heiner Müller – who was Heise’s mentor and fatherly friend – once put it. So that this story can be understood, so that something can be preserved which provides explanations, but only at a distance. In these days of Trump’s lies, people crave reality, Heise says regarding the interest in films like his in America, where HEIMAT IS A SPACE IN TIME was shown at the New York Film Festival in the Lincoln Center. In MATERIAL, someone says, “You can think of history as long and drawn out, but in fact it’s just a heap.”

And nobody arranges this heap as cleverly and precisely as Thomas Heise, probably the most important German documentary filmmaker today.