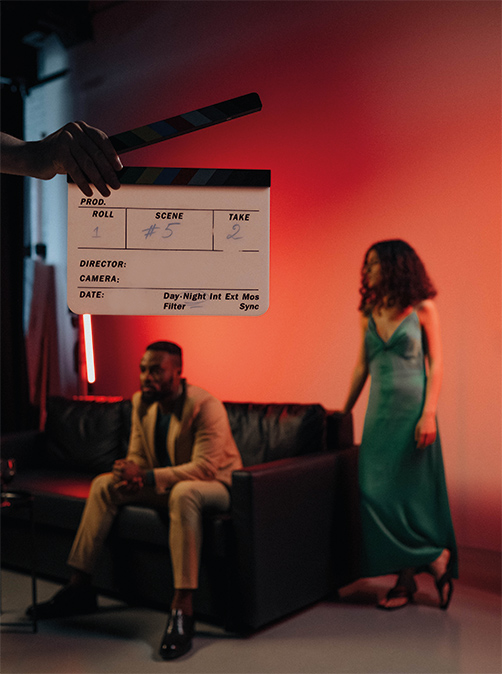 And yet it moves! Galileo Galilei‘s famous quote about planet Earth could also be applied to the German film and TV world. When German Films launched its major survey on diversity in the industry at the end of 2020, speaking with activists as well as with representatives of various institutions, this did not seem quite as certain. Almost in unison, they complained about a lack of diversity among personnel in front of and behind the camera, as well as in the subjects being realised artistically. A good year later, deficits are still evident. But lighthouse projects have also emerged, which were already in the creative pipeline at the time and are now highly successful on TV and in film, enjoying excellent attention from the general public

One example worth mentioning is the mini-series ELDORADO KADEWE – JETZT IST UNSERE ZEIT by German director Julia von Heinz. This six-part drama was broadcast on German television starting on December 27, in a good broadcasting slot “between the years“ as they say in Germany, i.e., when the family visitors have departed after Christmas, and peace has returned to the sofa.

ELDORADO KADEWE is set in Berlin during the twenties and early thirties and tells the story of a department store dynasty against the backdrop of the rise of National Socialism in Germany. But von Heinz also focuses the series on the love story be- tween two women trying to find their way in the tense atmosphere created by sexual libertinage and massive social oppression in the roaring twenties. Other strong roles are played by people of different genders, skin colours, sexual orientations, and physical as well as psychological and social predispositions. Von Heinz develops the whole thing comparatively true to life; almost organically from the story that is asking to be told.

The fact that projects like this are evidence of movement in the German industry is confirmed by the new study Visibility and Diversity in TV by the MaLisa Foundation, which – together with its partner institutions – published new findings on diversity in German television in October 2021. The study examined the diversity dimensions of gender, age, sexual orientation, attribution of origin and disability. Progress has certainly been made by comparison with the MaLisa study of 2017, but there is still a need for more action, as those responsible emphasize. The foundation initiated by actor Maria and her daughter, Burda publisher and musician Elisabeth Furtwängler, launched both studies together with the four major TV broadcasting groups and film funding bodies in Germany. The study was led once again by Prof. Dr. Elizabeth Prommer of the Institute for Media Research at the University of Rostock.

Commenting on the key findings of her research, Prommer notes: “We see that TV programming still shows a predominantly white and male world. But there has been progress in individual fields. For example, fictional TV stories feature nearly equal numbers of women and men. The proportion of protagonists who could be read as people with an immigrant background, Blacks or persons of colour is also highest here. These positive developments are most evident in the more recent productions of 2020.“

Because quite a significant number of cinema films in Germany are made with the support of TV stations or in co-production with them, these results can also be translated to the big screen to some extent. The Federal Government supports, indeed it demands such developments. This has intensified with the change of the Minister of State for Culture from Monika Grütters (CDU) to Claudia Roth (Green) in December 2021. “The Federal Government Commissioner for Culture and the Media (BKM) stands for cultural diversity, independent critical media, and an open and free social order,“ the federal authority states. “While respecting the state‘s duty of neutrality, this includes continuously developing and improving the framework conditions for the cultural and media sector at the federal level.“

In addition to taking gender equality, environmental sustainability and the interests of people with disabilities into account, the new Film Funding Act, for example, now explicitly stipulates “working towards more diversity in the film sector as a mandatory task of the German Federal Film Board (FFA)“. This can be achieved with a variety of measures, such as targeted sensitization and training of the funding bodies, or more diversity in their composition. “However, it is also important for broadcasters and platforms to clearly communi­cate their own expectations as clients and licensees; in some cases, they have already found gratifyingly direct words in this respect,” says the authority, and “all those involved must feel committed to this central goal. Because German films and German series must be as diverse as our society in order to do justice to their artistic and social role, to justify their funding with public money, and also to be successful at the box office, on TV, or on streaming platforms.”

These clearly formulated demands from the politi­cal arena are being received well by their counterparts on the cultural scene. For example, the German Film Academy states in the German Films survey on diversity: “We have been dealing intensively with the topic for a year and a half, which is not least due to the initiative of our board members Meret Becker and Dennenesch Zoudè.“ As the German Film Academy, they are dealing with the topic on two levels: “On the one hand, we have been able to realize several awareness-raising workshops for our members on various dimensions of discrimination.“ On the other hand, a diversity working group is dealing with the question of possible structural discriminations within the Academy and formulating new goals accordingly.

The German Academy for Television (DAfF) sees its task as lending voice to creative people in the various trades, from the development to the production of German television programmes. It has been “committed to maintaining and promoting diversity at all levels from the very beginning,“ according to its responses to German Films.

As an association of creative professionals in the television industry, it believes it is vital to promote growing awareness of the importance of social as well as creative industry diversity, intersectionality, and inclusion. “Checklists, codes of conduct and similar tools can be stimulating and helpful. However, if they are imposed indiscriminately on every project, as a regulatory obligation with no deeper understanding of creative processes, they can also hinder the necessary balancing of different aspects and demands within the framework of what is feasible in each case,“ say the DafF spokespersons. “If such aids are demanded, a sense of reality and a feel for proportion and differentiation in their application must be required and practised in return. After all, diversity can be achieved, among other things, not only within a single project but quite possibly through a range and multiplicity of differing projects.“

The DAfF also notes a growing awareness in the industry overall, not least because the pressure to justify a lack of diversity is growing. Filmförderung Hamburg, for example, has developed a diversity checklist, and UFA has made a self-commitment to meet by 2024. Nevertheless, the DAfF also emphasizes that despite being fully aware of fictional programmes’ influence on the creation of social awareness and opinion, they “must not be overloaded with social relevance in a didactic manner, because well-meant does not always equate with well-made.”

German industry representatives who work intensively with foreign countries include international distributors such as Picture Tree International, which markets successful German arthouse productions. Their perspective on the problem of the lack of diversity in German film and television production has been sharpened as a result. In the German Films survey, the world distributor Global Screen, for example, responded: “Diversity is a top priority for us! Our American partner Will Smith is a visionary pioneer in this field with his company Westbrook Inc., and we are aligning our acquisition and sales more and more accordingly. Through the collaboration between Westbrook and Ebony Life (producer Mo Abudu), we are also expanding our links to the African continent and want to bring to the big screen authentic material in which Old Europe and Africa meet on an equal footing.“

Meanwhile, Global Screen is certainly finding what it is looking for in Germany, e.g., with the series WESTWALL and HINTERLAND. “We are interested in all film and series projects that tell authentic stories and live out diversity, either in front of or behind the camera. Even in the case of historical, European material, which is still in demand among our clients, we make sure that it takes a clear stand against right-wing ideologies and in favour of pluralism and diversity,“ says Global Screen.

Meanwhile, TV stations abroad are looking for more strong female characters, “but the topic of inclusion and diversity could be in even greater demand.“ As a subsidiary of Will and Jada Pinkett Smith‘s Westbrook Inc., which already made an important contribution to the Oscar quota achieved in 2015 and 2016 with its Oscar boycott call (#OscarsSoWhite), Global Screen is standing up for mandatory quotas.

In Germany, they said, the production scene has also become far more diverse in the meantime. “We have numerous female producers who are realizing some outstanding material with very high budgets; we have been working with them for years and have also been able to support them in their careers. The same goes for our activities with producers from immigrant backgrounds.“ They added that they see a global trend in this, and that it has been very much driven by Netflix. “Netflix has taken themes and stories that were traditionally arthouse and brought them out of their niches, made them prominent, diverse and young.“

In the German Films survey, Films Boutique also emphasizes: “As an international distributor, topics such as diversity, intersectionality and inclusion are playing an ever more important role. In other words, as a rule we try to find films that address these issues.“ The LGBTQ community is now fairly well represented in films and series, they say, “but mostly in the sense that LGBTQ is the theme (or at least a central theme) of the film or series.“ People with immigrant backgrounds are still not represented enough, they admit, and nor are people with disabilities.

Maren Kroymann provided the answers for world distributor M-Appeal. And she emphasizes among other things: “I was always looking for feminist films, too, as this is one of the main interests in my work, but a film needs to have a certain market potential to be suitable for our lineup, and at the time films containing feminist themes tended to be very niche. This has changed in recent years, luckily, as awareness of gender equality has progressed in western societies.“

Solveig Langeland responded to German Films for the world distributor Sola Media, which specializes in children‘s and family films. She says, “We be­lieve that we also have an educational mission in children‘s and family films. Since May 2020, we only invest in films with a diverse cast, ones that reflect our society with its ethnic diversity. We are very selective in our choice of films. Sometimes the reality is a little different, however, as we also purchase finished films where we have little or no influence in this regard. But we still try to make our own small contribution wherever possible.“ In order to advance Sola Media‘s key theme of inclusion, the company is currently developing its own animated film on the subject.

However, Solveig Langeland also describes how complicated it can be to introduce such a topic, not only to the German market but also worldwide: “For us, the biggest hurdles are in the international arena. Since our portfolio centres on children‘s films, many cultures are even more reluctant to open up in certain areas. We try to approach the issue with the utmost sensitivity and create solutions tailored to different societies and their needs.“ Diversity knows no boundaries, one might say, alluding to the MaLisa study quoted at the beginning of this article – but the greatest art may still lie in conveying it with subtlety.